What Is The Blood Moon? 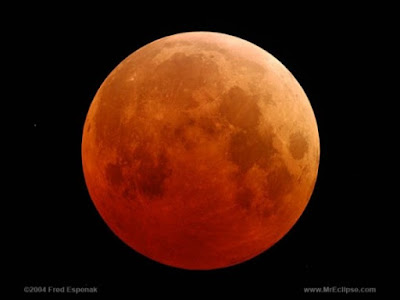 You have probably heard something about it by now: “This September we’ll have a Blood Moon!” And while that is true -there will be a Blood Moon on September 27-28 this year- many people do not know exactly what a Blood Moon is, and what its appearance may mean this year. If you are interested in what the future may hold, then the appearance of this specific Blood Moon should be of interest to you.

What exactly is a Blood Moon?

A Blood Moon is a lunar eclipse that is unlike any other. Normally, a lunar eclipse is when the Earth passes between the sun and the moon, thus blocking the sun’s rays from reflecting off the moon as usual (which is what makes the moon “shine”.) However, sometimes, when this happens, the sun’s rays curve around the Earth, which gives the appearance of a “blood red” moon during a total eclipse.

Now, you might think that Blood Moons are uncommon. In fact, they happen quite regularly, around twice a year, and without us noticing it, most of us have probably already seen a Blood Moon at least once in our life without realizing it.

So if Blood Moons are quite common, and many of us have seen it at least once in our lifetime, what makes this September’s Blood Moon quite significant?

Two things: First, moons turning into the color of blood is an omen in many cultures and religions. Second, it’s because this Blood Moon of 2015 is the last of what’s known as a Lunar Tetrad.

What is a Lunar Tetrad, and why is this year significant?

For this article’s discussion, we will focus on the Jewish significance of the Blood Moons (we will discuss others in future blog posts.) Major events affecting the Jewish people have occurred in close proximity of those last three tetrads. These events are as follows:

1.)    The Spanish Inquisition (1492, a year before Lunar Tetrad of 1493-1494) – this event marked the exodus of almost half a million Jews from Spain, and caused the punishment and torture of the Jews who were left behind despite converting to the country’s religion, Roman Catholicism.

2.)    The Rebirth Of Israel (1949-1950) – in 70 AD, Rome destroyed Israel and drove the Jews into exile. For the next 1,878 years, the Jews found no home on Earth, until 1948, when the 2nd significant Lunar Tetrad occurred: the founding of the nation of Israel. In addition, this happened after the holocaust of Adolf Hitler during World War II.

3.)    The Uniting Of Jerusalem (1967-1968) – for 2,000 years, the Jews have faced Jerusalem thrice a day to pray for the restoration of their home city and the rebuilding of their temple. On 1967, Jordanians attacked Israel and West Jerusalem, but the Israelis counterattacked and instead drove Jordan out of their hold on East Jerusalem and out of the Judea-Samaria territory, thus uniting Jerusalem for the first time since its destruction in 70 AD.

These three events coincided with Lunar Tetrads, which fell on Jewish feast days. And it is about to happen for a fourth time this year, on September 27-28.


I am not Jewish, should I be concerned?

While non-Jewish people might not feel like this year’s Blood Moon is significant, do note that these events that affected the Jewish people during the Lunar Tetrads sent ripples around the world and affected others as well. Not only that, other major religions and faiths have their own Blood Moon prophecies, like that of Roman Catholicism’s; Joel 2:31 of the common English Bible states
“The Sun will be turned to darkness, and the moon to blood before the great and dreadful day of the LORD comes.”

Now while we are not stating that the end times are upon us, we believe that these events bring with them major shifts in the world that we should all be at least ready for.