What Is Remote Viewing And How Does It Work 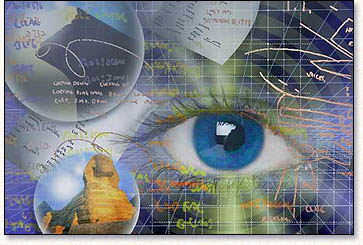 Have you ever wondered what it would be like to be able to see things that you normally could not? Well, we have previously discussed astral projection and how it can do these things, but there is another way that can give you the power to use the mind to access specific targets, and in higher levels, targets that are in different time periods: remote viewing.

What Is The Difference Between Astral Projection And Remote Viewing?

Astral projection and remote viewing are very similar, in the sense that it allows the user to travel through space and time without actually having their physical body do so. But the stark difference between the two is that astral projection projects the astral body out, giving an out-of-body experience, whereas remote viewing is the controlled use of extrasensory perception, or ESP, through a specific method, to perceive the target from great distances and even different times.

Another difference is that astral projection requires the user to fall asleep, thus a lot of time and preparation to be able to perform. Remote viewing sessions, however, are only about an hour or so, pretty much allowing the user to perform it at their convenience.

One key similarity between the two however is that, unlike ESP and innate psychic abilities some people have, both astral projection and remote viewing rely on learned steps to perform, which means anyone can learn the skill and do it as needed.

How Does It Work?
There are many theories surrounding remote viewing and how it works. Some experts in the field say that remote viewers tap into the “Universal Mind”, a cosmic database, if you will, where all information is stored that span space and time. Another theory is the “hyperconscious state” theory wherein the remote viewer can tune in, like a radio, on specific targets within the universal consciousness that ties all living things together. One more theory is the “virtual reality traveling” theory that allows the remote viewer to simulate an astral projection, but not really; the viewer is simply tapping into the cosmic energies that permeate everything in order to observe their targets.


Is It All Fake?
Skeptics abound claim that remote viewing is just “new age horse dung”, but throughout modern history, remote viewing has been observed and tested numerous times, that during the Cold War, both the US and the Soviet governments have devoted departments and funds to further its study and usage.

One famous case is that of Ingo Swann, who correctly remote viewed back in 1973 that the planet Jupiter had rings, at a time when it was Saturn that was known for its rings. Skeptics all claimed fakery, until later space probes confirmed his claim.

Many de-classified documents from both governments have confirmed experiments done by the CIA and the KGB to weaponize remote viewing and to use it in their militaries for their advantage. Documents contain everything from highly detailed and accurate descriptions of distant and classified facilities from both countries, which would not have been known otherwise except through actually being there and seeing it.

It is said that these governments continue to use remote viewing, despite claiming otherwise.

What Is Needed To Remote View, How Is It Done

There are 5 key elements necessary for remote viewing:
1.)    A remote viewer
2.)    Active ESP abilities – these abilities may be latent, or awakened, which most people will have to do if they are not naturally psychic
3.)    A specific target – these targets may not be known to you in detail beforehand, but you have to have some idea on what you want to view.
4.)    The viewer’s recorded perceptions – it is important to record what the viewer sees for later confirmation.
5.)    Confirmatory positive feedback – this is to ensure that the remote viewing worked and that the viewer did not end up perceiving something different.

There are many methods that can be used to start remote viewing. Just like martial arts, there are different styles. The three most common are:

We will be tackling each method and style in full detail in future posts, but what all three have in common are the following:

1.)    It requires the need to empty the mind – this can be done via meditation and other methods, but before the remote viewing can begin, your mind has to be empty to receive all the information that your viewing will give you.

2.)    Controlling the imagination – it is imperative that the imagination be kept quiet and still, as it is an easy tendency for a viewer to fill in the gaps with ideas that come from within, and not from without. A viewed target may appear incomplete to the beginner, and it is easy for the viewer to invent things subconsciously to fill in the gaps – this is human nature. So it is crucial to control this.

3.)    Ability to interpret the viewing – whether through words or illustrations, efficiently interpreting the viewed target is crucial as it is also necessary to properly translate what is seen by the mind so it is the same as what will be seen by others.

Remote viewing is a powerful skill that can be learned by everyone. Tune in to our detailed remote viewing guides in future blog posts. Do you think you have what it takes to do remote viewing? Set the tone with our new binaural beats track for remote viewing here:


Using a complex binaural beat frequency mix that ranges and flows from 4Hz to 8Hz, and an isochronic tone of 5Hz, the Theta range brainwaves assist and encourage the state of mind to enhance imagery, creativity, visual recall, zen meditation, and access to the subconscious mind while reducing mental fatigue. There have been brainwave studies that would confirm that a person can reach astral planes through a sequence pattern of multiple frequencies. This track contains triggers that can assist in helping you reach a state of deep meditation, which is the gateway to do astral projection and remote viewing.

Related Articles:
The Astral Plane And The Silver Cord
The Beginner's Guide To Astral Projection (Part 1)
The Beginner’s Guide To Astral Projection (Part 2)
Transcending Barriers: Explaining The Religious Ties And Answering The Supposed Dangers Of Meditation
Meditation Improves Business Productivity
Meditation for Physical Performance
4 Kinds Of Meditation That Will Bring Your Business To The Next Level
Group Meditation Is The Untapped Team Building Activity To Increase Productivity