How To Protect Your Money During Ghost Month 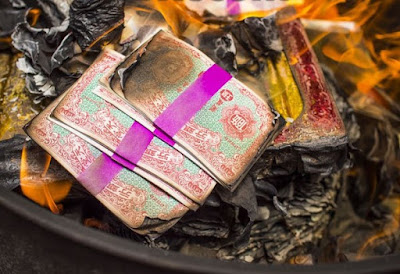 Ghost Month is upon us, which according to Chinese tradition is when hungry ghosts roam the earth causing bad luck and mischief and even disasters. One of the possible casualties during Ghost Month is one’s finances, whether it’s money being lost for various reasons, deals going sour, or purchases turning out to be failures! Here’s how you can protect your money during Ghost Month.

They say an ounce of prevention is worth a pound of cure, and this is very true during Ghost Month. Here are the things you shouldn’t do during this uncertain and dangerous period.

1.)    Major purchases – big purchases like cars, houses, properties, jewelry, are not recommended during this period. Bad luck may cause the cars to be lemons, the house to be rife with damage and repairs, jewelry may devaluate or even turn out to be fake!

2.)    Major sales – the same as purchases, selling big ticket items may end up to be disastrous during this time. Your house may end up being sold under proper value, property appraisals may be low or downright wrong, and so on.

3.)    Travels and vacations – avoid traveling far and away on vacations, especially if much spending is planned or expected. You may end up way overbudget and spend more than planned without noticing, and may even lose money during travels, whether via theft or some other means.

4.)    Late night outs – avoid spending too much money at night, from partying and drinking or even just dining out. Similar to traveling, you may end up spending more than planned, and not only that, attract bad luck and misfortune, in the form of lost wallets, muggings from criminals, and even possession of hungry ghosts who will be attracted by your money.

Prevention is not just the way to protect one’s money during Ghost Month. Being proactive is also key. Here are the things that need to be done to protect your money.

1.)    Burn joss paper – joss paper offered on the sidewalk in front of the home, right on the front step, or anywhere that can easily be accessed, will appease the hungry ghosts. Not only will it be a gesture of good will, but will be a substitute to them taking your actual, real money.

2.)    Donate to charity – donating to charitable organizations or good causes will build up positive karma, which in turn will bring you fortune after the Ghost Month is over. While this may sound like buying karma, do note that “donating” to charity can be done many ways, from volunteering to donating old clothes, and may not necessarily mean monetary support.

3.)    Wear amulets, install protections at home – keep the luck and good vibrations in the home and away from the prying hands of hungry ghosts by installing numerous protective items inside and outside. Our guide here can help. As well, wearing talismans will keep your financial fortune intact!

Follow these tips and you’ll make sure your money stays in your wallet and bank account, and not in the hands of the hungry ghosts! As well, improving your mindpower can also attract money and good fortune. Listen to this binaural beats track for money to help you with this!

Jupiter is known for good luck, spiritual teachings, higher knowledge and success. It represents growth, creative power, prosperity and good health. With a binaural beat mix of 0.5-4Hz, found in the Delta wave, and a carrier frequency of 183.58, which is associated with the orbit of Jupiter itself, this meditative music aids with anti-aging, deep sleep and taps the deeper levels of our subconscious as we search for divine knowledge and personal growth.

Related Articles:
How To Protect The Home During Hungry Ghost Month
How To Prepare For And Stay Safe During Ghost Month
The Astral Plane And The Silver Cord
The War On Nightmares: Fighting Back With Reality Checks And Lucid Dreaming
Is Lucid Dreaming Dangerous?
Transcending Barriers: Explaining The Religious Ties And Answering The Supposed Dangers Of Meditation


Check out these products: